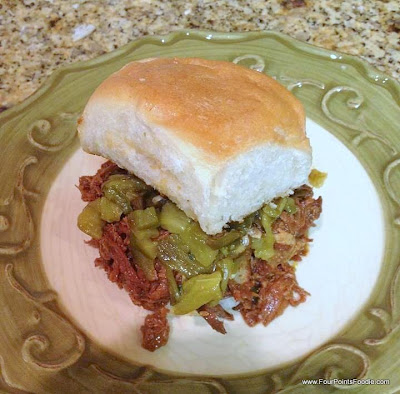 The title of this recipe is certainly a mouth-full, but the flavor you get with that mouth-full is amazing.

I hosted a "Stock the Bar" Couples Shower for my brother and his fiance, Amanda.   I thought having more finger foods would be fun, especially for the guys, as the football games were on and it was a casual atmosphere.   Pulled Pork sliders seemed the way to go and while at the grocery store I noted some Hatch Green Chile's so grabbed those and a few jalapeno's.   Though I fire roasted the chile's and jalapeno's I opted for a cole slaw topping on the first batch of sliders.   It wasn't until later in the evening with the party in full swing was I spurred to try it with those delicious charred gems and I'll thank my friends husband, Chet, for peeling the chile's and starting this.   So in the middle of a party in my home, I'm playing in the kitchen... how fitting.

Some people know my food story and others don't but I grew up playing in the pantry.   My father was an Air Force pilot and we moved every year for 16 years straight.   There were times when we moved into a new neighborhood and I didn't have friends to play with so I'd play in the pantry.   What I know now as marinade was simply the curiosity of a six year old, blonde hair and blued eyed, bored little girl.   I'd steal butter and sugar from the kitchen and run back to my room where I had a complete kitchen set up (in that lovely 70ies avocado green) and pretend to make cakes.   The year I got my Easy Bake Oven was monumental and I still remember it like it was yesterday.

Being able to play in the pantry without any restrictions lead me to my no fear attitude in the kitchen.   I will try anything, attempt anything and if I fail, so what.   I don't normally measure unless I am baking, and I will wander aimlessly through Whole Foods or Central Market to see what I can find to play with.   Yes I play with food... and I love it!

So here is the newly created Pulled Pork Slider recipe, which by the way, is far better than the one with cole slaw on it.

Fire Roasted Chile and Jalapeno Ingredients:
Directions:  Over a high flame on the grill, char and blister the skin of the chiles and jalapenos.   Place in the sack to steam.  Once cool, peel the charred skin.  Split open, remove seeds and chop.

Pulled Pork Ingredients:
Directions:   Combine dry ingredients and rub over trimmed pork should roast until ready to cook, a day in advance.   In a large crock pot insert or regular pan, heat olive oil and sear roast on all sides.   Add apple juice and simmer, again in either the crock pot or on the stove top, until the pork is very tender.   Drain as much fat off the top as possible, then remove and shred or "pull".   Return to the crock and finish with the Woody's Sweet BBQ Sauce, chipotle in adobo sauce and keep warm until ready to serve.

To assemble:   Toast slider buns on a hot griddle with a bit of butter.   Add the pulled pork and top with a mixture of the fire roasted chile's and jalapeno's.   Slap the top on it and devour!   Perhaps you could add a slice of jalapeno jack cheese, but it's not necessary!

We've recently launched the site RecipesUS.com, where users can search through hundreds of thousands of recipes from American food sites and blogs. We noticed that you have a lot of delicious recipes on your blog and we would like to suggest you have a look at our site: http://www.recipesus.com/.

If you want to add your food blog to the list and have your recipes indexed on RecipesUS.com, all you have to do is follow these instructions: http://www.recipesus.com/add-your-food-blog.

Hopefully your food blog will be up there in the top!

It would be helpful if there was a Pinterest option.